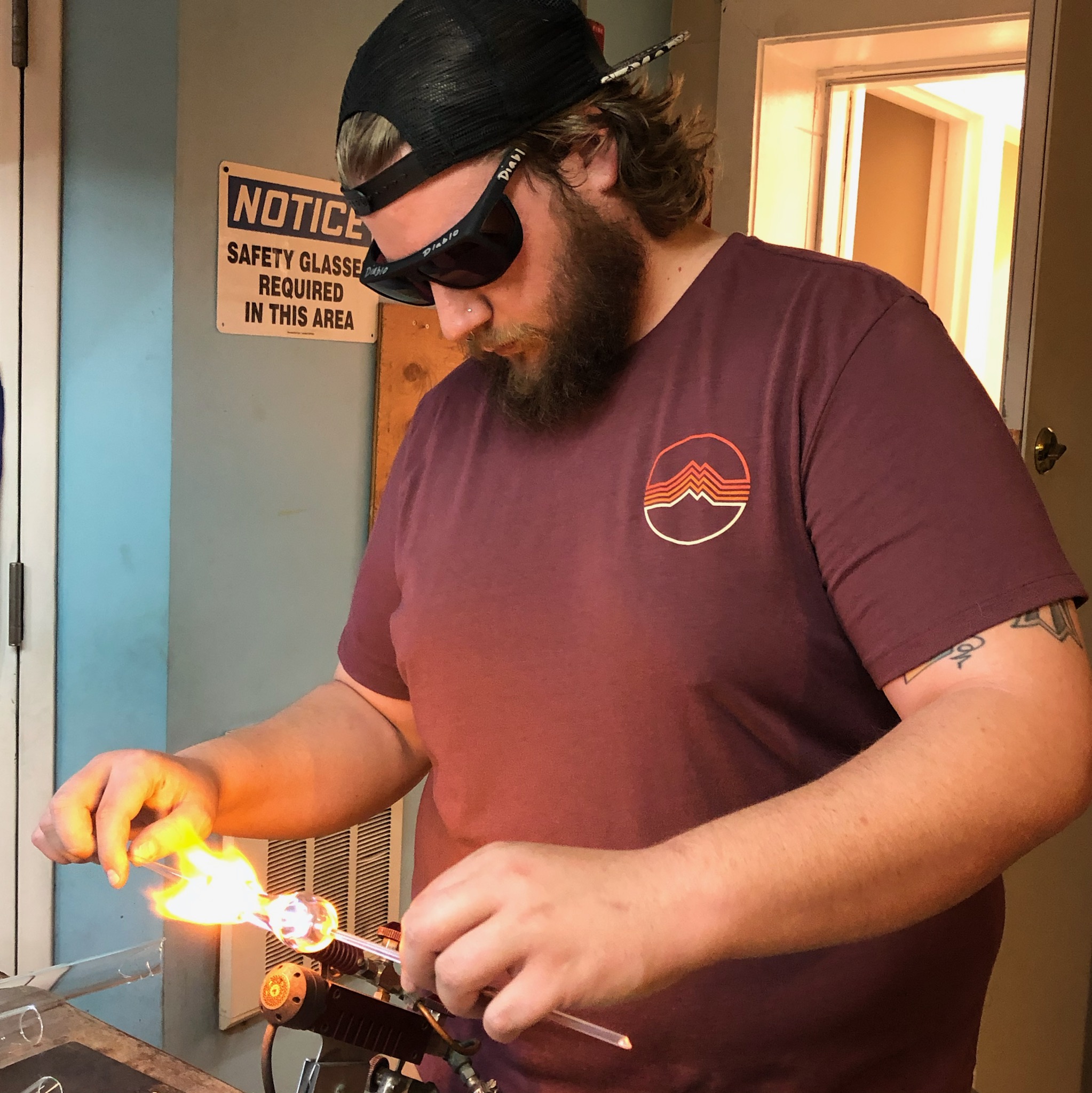 Adam Lewis received his bachelors in Business Management with a minor in 3D Art from Salem State University in 2015. Adam began working with glass in 2011 and fell in love with the art because of uniqueness of the medium and ubiquitous nature of glass in both fine arts and daily life. Starting out working largely in soft glass, Adam has expanded into flameworking in recent years. Adam began teaching at Diablo in 2013, and he enjoys the the special experience of introducing people to glass. In his personal work Adam focuses on jewelry and drinkware. Adam currently lives and works in Boston, Massachusetts. 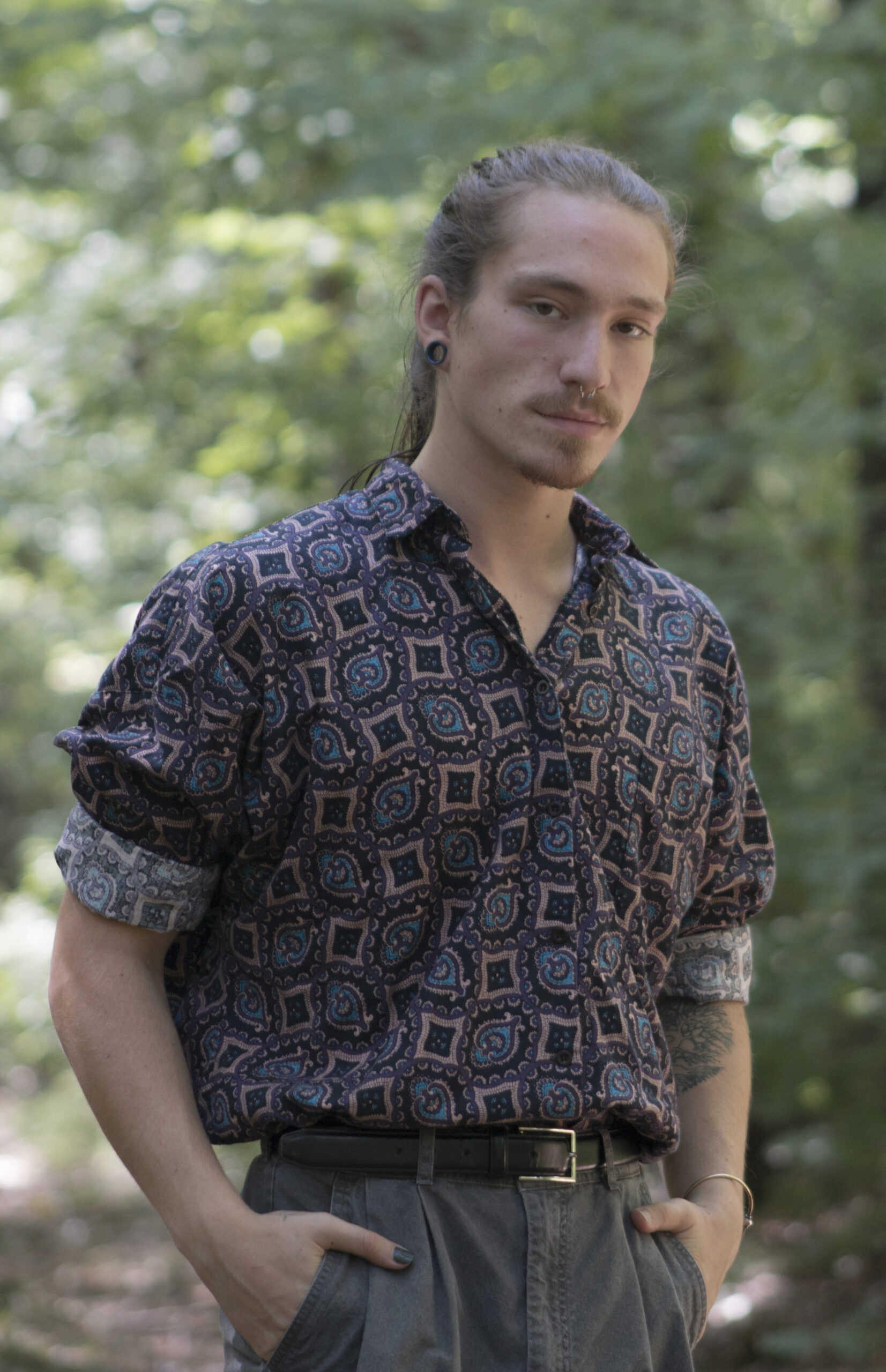 Alex Gaudet is a Boston based glass blower studying at Massachusetts College of Art and Design. His main attraction to glass is based around its fluid nature when hot, and its optical effects when cold. This infatuation with the idea of creating something out of glass began in his early teen years and he continues to pursue the art form today. His latest projects revolve around large organic shapes and mirrored surfaces. Alex enjoys teaching, and providing help to anyone who asks for it! 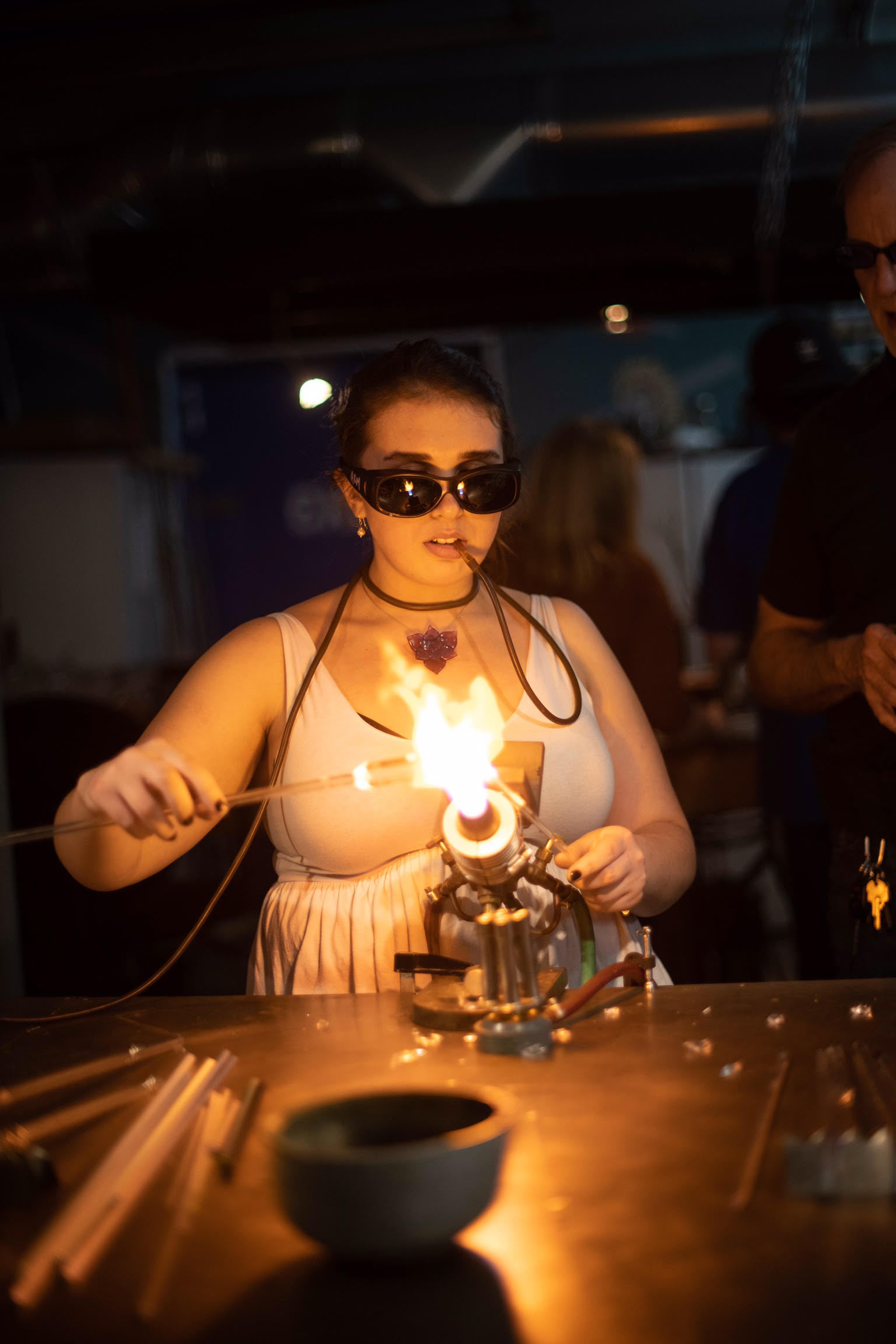 Angela McHale earned her BFA with a concentration in glass from Massachusetts College of Art in 2017. Since then she has continually worked in glass and has taught at Snow Farm: New England Craft Program, Diablo Glass School, New Street Glass, and various other private and public glass studios. Angela’s work straddles the boundaries between order and chaos while grappling with concepts such as impact, loss, and the apocalypse. Her artwork is inspired by personal narratives and current events, most notably the climate crisis. Recently she has been working with plasma sculptures and utilizing light in her work as a metaphor for the soul. Angela completed a two-year residency at the Worcester Center for crafts in 2019 where she remains on staff as a flameworking instructor. In 2021 Angela graduated with an Associate’s degree in Scientific Glass Technology from Salem Community College in New Jersey and has been using the skills acquired there to advance her work. 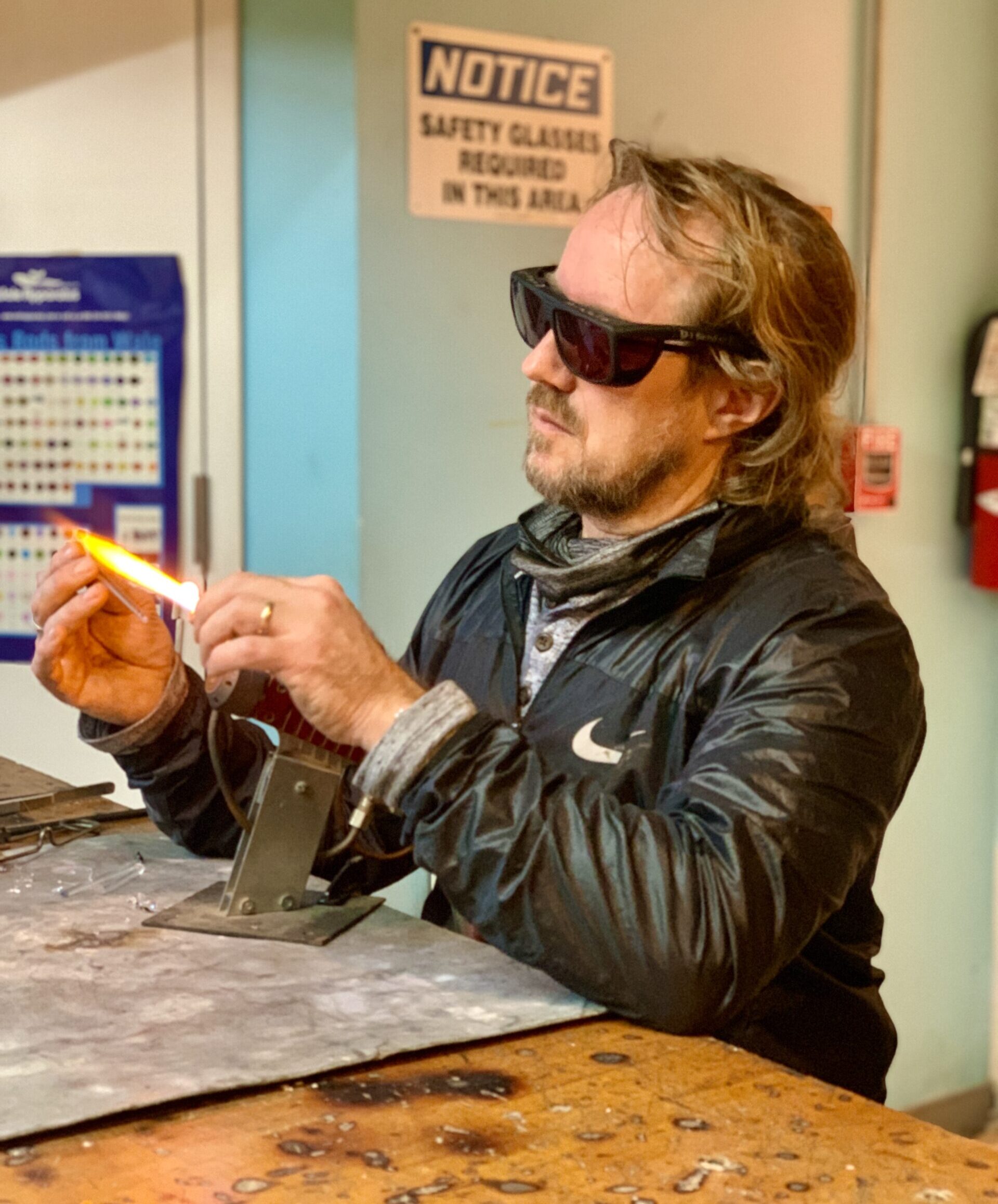 Christopher Watts joined Diablo Glass School in 2002 and has been a constant member of the Diablo community almost since the school’s inception in 2001. He teaches in all areas of the studio, with particular emphases on glassblowing and kiln casting.

In his own studio practice, he creates conceptually driven glass sculpture that focuses on contemporary issues such as perceived and agreed value, and the concealed meaning behind a material’s history. He uses the natural beauty of the material as an entry point and invitation for viewers to interpret the narratives that are at the heart of his work.

Christopher earned a BFA from the Rhode Island School of Design, and an MFA from Massachusetts College of Art and Design.

He has also taught glass and sculpture at the Massachusetts College of Art and Design since 2002. In 2008 he co-founded a glass program for Boston University at Diablo. He has been a visiting critic and lecturer at numerous school and universities including MIT, Alfred University, Salem State University, the Corning Museum of Glass and Sunderland University.

He has exhibited in solo, group and two person shows throughout the US. His work is held in private and public collections. His work has also been featured and reviewed in various publications including 25 years of New Glass Review published by the Corning Museum of Glass. 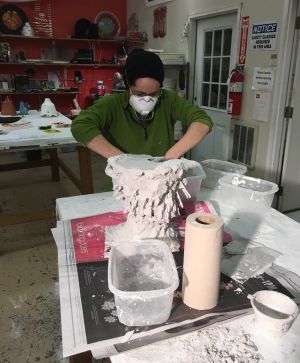 Elise L’Herault graduated from Boston University in 2008 with a BFA in painting. Elise enjoys exploring mediums and has produced works in oil paint, acrylic paint, charcoal, embroidery, collage, and casting resin in addition to glass.

She has been playing with glass (primarily fused glass) since 2007. She has experience teaching people of all ages, abilities and skill levels. Her background in painting gives her a unique approach for teaching flat glass. Her work focuses on bold colors, a variety of line qualities and solid shapes with free association being a predominant theme. 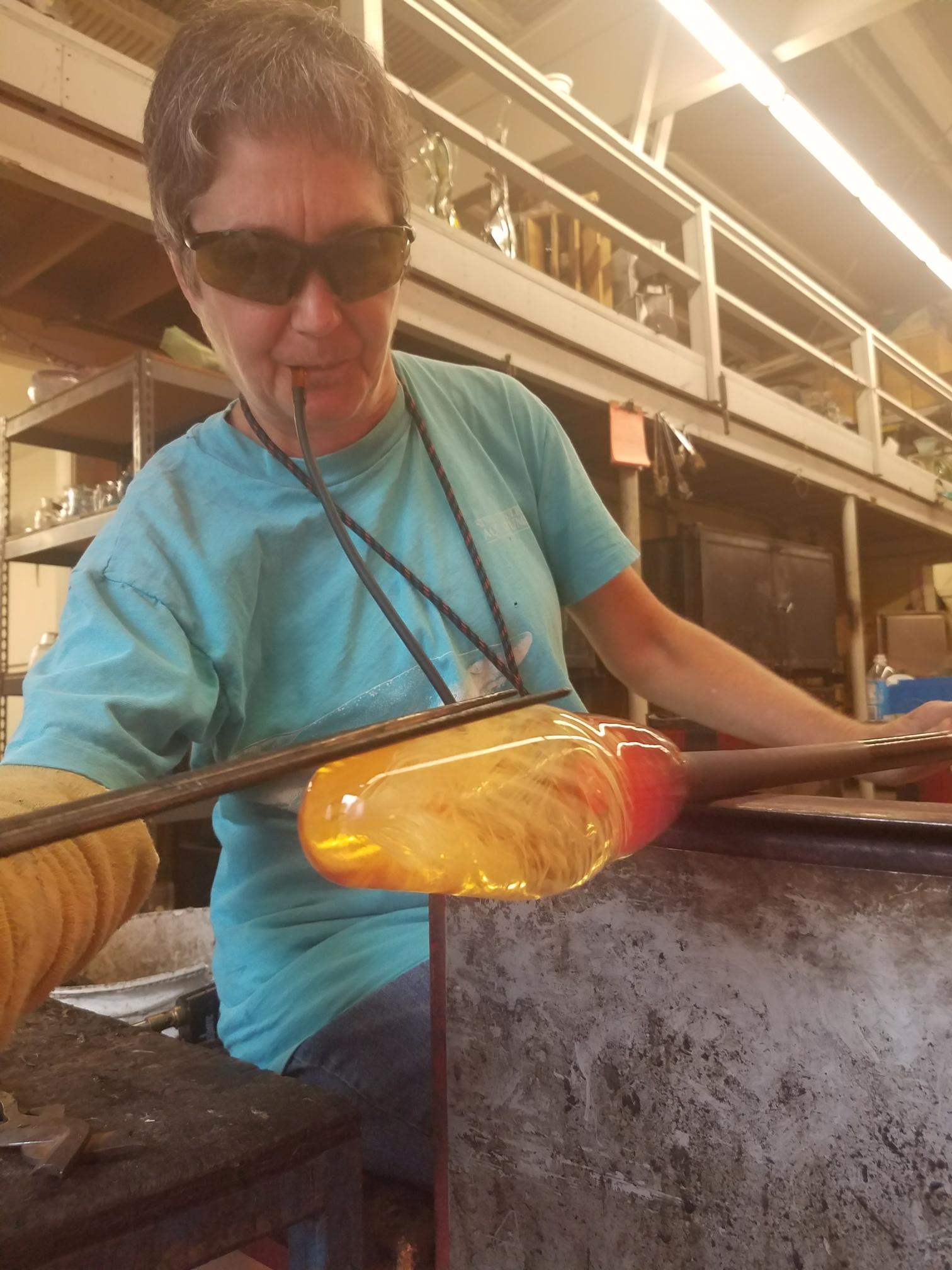 Ellen Garvey signed up for a glassblowing class at Salem State University as a way to escape from her stressful and demanding career in high tech. It wasn’t long before she was hooked. It’ s a very hot, dirty, expensive, and possibly dangerous environment that for some reason captivates her and keeps her coming back for more!

Now that she is retired from that work, the other side of her brain gets more involved. Yes, she IS a lefty. Which is another challenge since just about everything needs to be done righty.

She has continued to learn new techniques with Chris Watts at Diablo, and at special workshops at Corning Museum of Glass Studio, Haystack School of Arts and Crafts, and NOCA Glass School in Cambridge, MA. 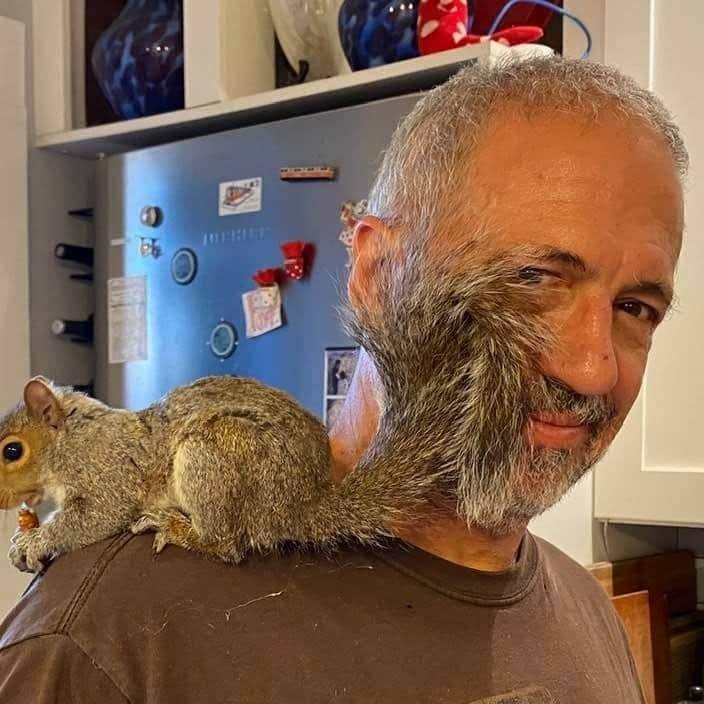 Ken came to glassblowing in a rather unusual manner. Years ago he took his wife to a Paperweight and Wine date right here at Diablo and never left. As a professional French Horn player he approaches glassblowing with a ‘lyrical’ attitude and likes to push the limits on how things ‘should’ be done. His glassblowing partner will tell you that you should never tell Ken: “It’s not possible to make it that way” because he will just dig in his heels and either find a fabulous new method, or fail miserably. Either way – it’s a passionate addiction. 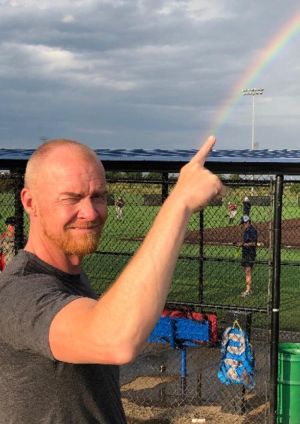 Matt has been involved in the glass crafts for almost 25 years. This happened because he is from a V-E-R-Y crafty family. In the 1990’s, then in his early 20’s, he realized he wasn’t going to be the only one who didn’t have a craft! Keeping up with this crafty family, he took an 8-week community education class on Stained Glass and was hooked! The rest a is quaint history of self-study, mentorship and
increasingly complex and interesting designs of various sizes, shapes and grandeur. Matt has taught friends and family in his home studio/shop for the past ten years, helping them to develop all the basic skills needed to enjoy this craft/art. The pandemic of 2020 brought Matt into the Diablo Glass family. Matt considers himself a serious glass hobbyist with a never-ending thirst for new glass knowledge and techniques, while his professional life involves working as an American Sign Language Interpreter. He lives with his husband and daughter in Jamaica Plain, MA. 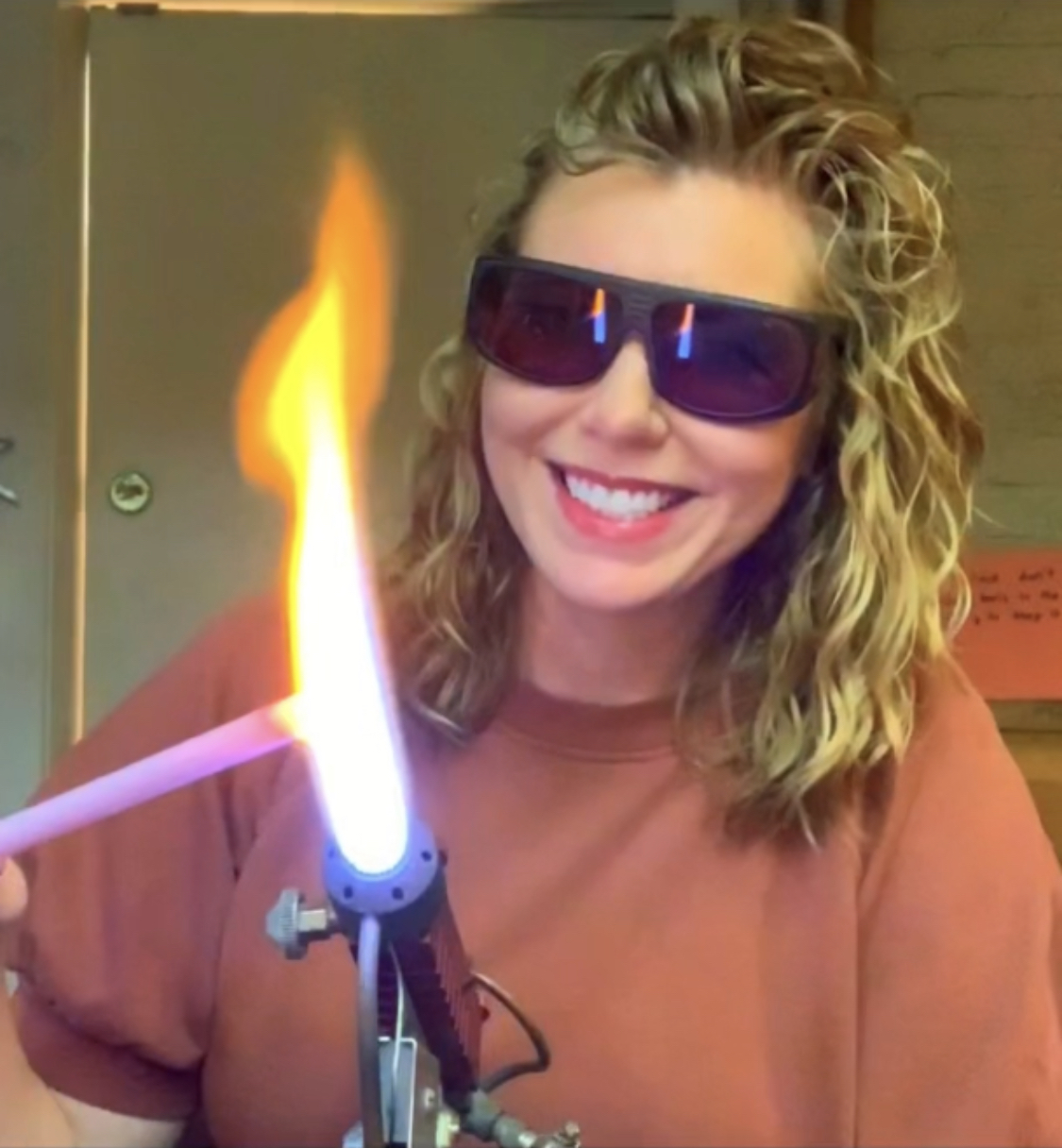 Sarah Michalik is a Massachusetts-born artist currently based in Boston, MA. Sarah received her BFA in Glass and Ceramics from Rochester Institute of Technology, and a MFA in Glass and Ceramics from Tyler School of Art at Temple University. She also has also received a Teaching in Higher Education Certificate from Temple University and has been a glass instructor for over 10 years.

Currently, Sarah creates work for her company, Charged Glassworks, which specializes in handmade glass art, home decor, and jewelry. Charged Glassworks can be viewed through www.ChargedGlassworks.com and has been featured in BuzzFeed, Unilad, Boston Voyager, Boston Globe, American Craft Magazine, Harper’s Bazaar, West Elm, the Craft Industry Alliance, and The Flow magazine. In the Massachusetts area, Charged Glassworks has been shown at the Museum of Fine Arts Boston, the Institute of Contemporary Art, the DeCordova Sculpture Park, and the Attleboro Museum of Art. Sarah has been a speaker for the Sustainable Business Network of Massachusetts and has developed opportunities for other small businesses in MA through her partnership programs. All of the glass work for Charged Glassworks has been created here at Diablo Glass School. 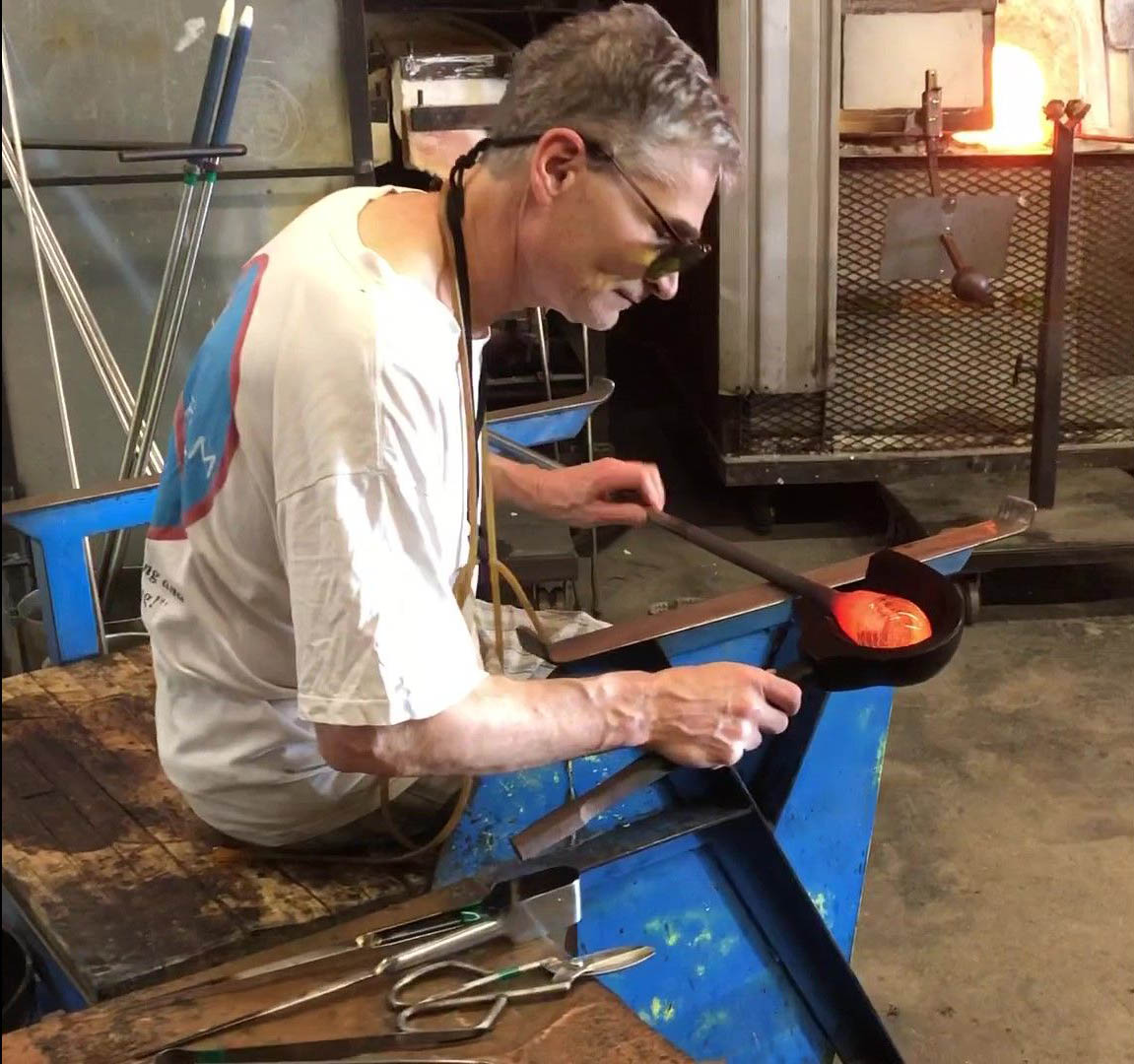 Seth began blowing glass in 2012, taking classes at Diablo. He was immediately captivated by the challenge of turning molten glass into beautiful, functional objects. Seth continues to study at Diablo. His focus is on expanding his understanding of form and color and exploring new techniques, both historical and contemporary, as they apply to blown vessels.